You are here: Home / Archives for Refurbishments 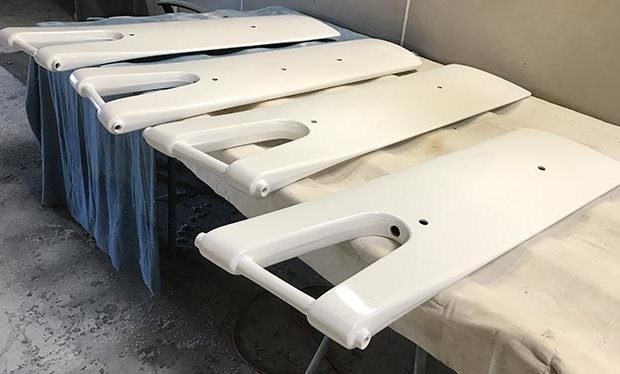 Sailability is an organisation that helps all ranges of disadvantaged people to experience the joy of sailing. We were proud to be associated with this worthy cause and to be able to assist. These four centreboards are ballasted and from some local boats at Grahamstown Dam club. The problem with the weighted boards is that the down […]

This 5m Seafarer has been passed down in the family and has received a well overdue refit. The job began as a simple detail but some extras were added. Things like a new black gunnel rubber, new pedestal seats, numerous gelcoat repairs and a repair to the gunnel join on the Starboard side that had […]

This Cruise Craft was well loved but needed some major work done. The transom was just hanging in there and was replaced only to discover that the two Starboard outboard hull stringers were rotted out. This was evident once the old transom was removed. As usual we used only epoxy for the replacement with all […]

For those who have been following this project, the owner collected the boat last weekend. For anyone who has just tuned in, this boat has been re-modelled from a windscreen/forward helm to a centre console configuration with a raised fishing deck forward. This deck had flush mounted lockers to access the storage underneath. A custom […]

Another boat repairer deemed this Jetski a write-off due to the hull damage on the Starboard aft quarter. The damgaged area was re-laminated with multiple layers of glass fabric and epoxy building the area up to full strength. This ski also was suffering from paint delamination which is a defect direct from the Yamaha factory. […]

Leaks on boats are never a good thing. This client had an old badly designed opening center window with a foam type seal. The frame behind the seal was full of holes etc so this was never going to seal. The customer initially wanted us to refurbish the existing window however it was cracking at […]

A professional fisherman requested this hull re-fitted with a new wet-deck, bulkhead and front locker. The hull was solid FRP and some modification was needed to gain support for the new floor. All new parts were epoxy coated and bonded/glassed with epoxy. All finishing was done using 2 pack PU for long life.

This is another major re-build we did on this 10m power catamaran that started off as a small dry-rot repair and spread rapidly to almost a full wheelhouse replacement. The top roof was mainly structurally intact but all the cabin sides and front were replaced. Also part of the fore-deck and one of the bow […]